A couple of weeks ago (16 October) in his blog, I noticed that Greg Mankiw gave some data about the growing importance of the minimum wage in the U.S. He writes:


The minimum wage has a much larger role now than it did three years ago, in large part because of the legislated increase in the minimum wage from $5.15 to $7.25 an hour.  For example, comparing the 2010 data with the 2007 data, one finds the following:Question for class discussion:  In light of what is occurring with the overall economy during this period, how would you evaluate the policy change regarding the minimum wage?

Of course he's hinting that the 'right answer' is that raising the minimum wage was a bad idea in a time of rapidly falling demand.

Mankiw forgets to mention the timing of the increases: it was already $6.55 in July 2008 two months before the financial meltdown, so post-meltdown only 70 cents was added to raise it to $7.25 in July 2009. As well, a bit of historical perspective might help students too in thinking about whether the minimum wage is unreasonably high.

I found this nice summary at a webpage at Oregon State University: 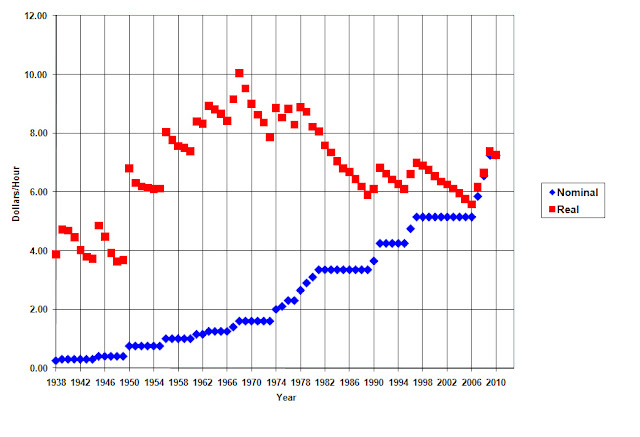 According to these calculations, the federal minimum wage was actually higher in real or inflation-adjusted terms back in the mid-1950s. It was higher or about equal to the current level for the entire period from 1956-1983.