A quick note on "Foundations of Economics: A Beginner's Companion" 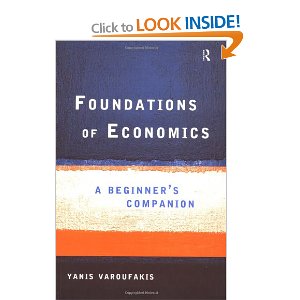 But last week, after a friend urged me to work to combat the indoctrination of economics students (rather than loaf, my natural inclination), I did finally stumble upon it after idly googling "economics students indoctrination". Google found the book with this because of Chapter 12.2 of Varoufakis's book is entitled "Economics courses as indoctrination", with subsections "The economists' narrative against cooperation", "The economists' dilution of the concept of social responsibility", "Teaching that value exists only if it can be quantified", "The economists' apology for inexcusable social failures", and "The economics profession as a priesthood". Obviously intriguing stuff.
Varoufakis tries, in a general way, to do what we did in the Anti-Textbook: to set out what he sees as the essence of the theory and to critique it, but adding in along the way some intellectual history about where these parts of the subject came from in the first place. I ordered a copy immediately and it arrived today. I'll write some more about it here in the future when I've had a chance to delve into it properly.
As the image above suggests, you can have a peek inside the book on the Amazon website. The publisher's list price is steep (US$80 or so for a paperback, at least in North America), but it's a 400 page book that any serious economics student should not be without. Get someone else to pay for it; ask for a copy for Christmas!
RH
PS: You can also find used copies at half price. In looking for used or out-of-print books, I often use this search site, which looks in many databases.
Posted by AntiTexter at 6:27 PM 1 comment:

An Economics Anti-Textbook reader sent us this link to amusing comic strip that pokes fun at economists' neglect of poverty (or really, the textbooks' neglect; there are economists doing very good work on poverty and inequality issues). Note: the final panel appears when you hold the mouse over the red dot at the bottom left, just below the comic strip.

RH
Posted by AntiTexter at 11:52 PM No comments:

Graduate students are often employed as teaching assistants (TAs) in the larger universities, meeting students in small tutorial groups. These allow for discussion and interaction that is impossible in the huge lecture theatres commonly found in the modern educational factory. The setting allows an enterprising TA to open some eyes with good examples and questions. For an illustration, check out this amusing blog entry "What I taught students in my first TA session", written by an anonymous American grad student.

RH
Posted by AntiTexter at 2:50 PM No comments:

If you look, there's no shortage of good comment these days about the rich people's money behind the Mad Hatter's Tea Party movement in the US. George Monbiot identifies billionaires Charles and David Koch of Koch Industries as a major force. 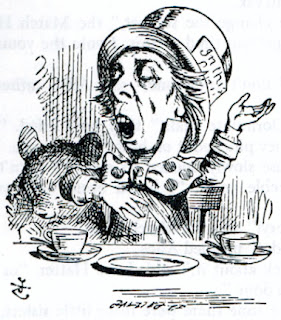 Along with the Kochs, a portion of these Tea Party types seem to subscribe to some version of what could be called 'classical liberalism' or 'libertarianism'.
I was reminded recently of right-wing money's efforts to recruit students to the cause with the lure of money  and internships.

Our department got a mailing from The Institute for Humane Studies at George Mason University. The slogan "Advancing Liberty. Advancing Careers" has a certain ring, doesn't it? You can pursue your self-interest, while feeling good about yourself because you are also advancing "liberty", and who can be against "liberty"? Scholarships, fellowships, internships and seminars are available for right-thinking students to plug into the huge right-wing propaganda network in the US. One of the things available is a "Charles G. Koch Summer Fellow Program". Yes, that Charles Koch, the Mad Hatter.
Here's how the Institute for Humane Studies put their mission:

If our country is to enjoy enduring freedom and prosperity, it is critically important that today’s college students—tomorrow’s opinion leaders—understand the benefits of a free enterprise system and its foundation in the values of individual liberty and responsibility. The Institute for Humane Studies is meeting this challenge by teaching students about the principles and practice of freedom and cultivating a new generation of professors, journalists, policy experts, and filmmakers who have the potential to advance liberty in their careers.

I showed it to a colleague who shuddered. He wondered if it was just coincidental that the style reminded him  somehow of 'socialist realism' and the workers and peasants gloriously march into a bright new future...

The billionaire Koch brothers, while not busy stoking the fires of the Tea Party revolt have foundations that lavishe money on not only the Institute for Humane Studies, but also George Mason University itself, where the Institute for Humane Studies locates to give itself academic cover and a veneer of respectability. GMU's economics department in particular has cashed in.
One of the points of The Economics Anti-Textbook was to urge students to think for themselves when they go into an economics course, and to try to give them some pointers on how to do that. Our focus, naturally, was on the mainstream textbooks with their subtle 'free-market' message, but that is only one part of the environment in which students may find themselves.
Economics deals with the issues at the very centre of the struggle for wealth and power in our societies, a struggle that dominates most aspects of politics and public policy. For that reason, economics education must be a primary target of those who want to make sure that economists are trained to think in the right way and to pass those views on to the next generation. The Institute for Humane Studies at GMU is only one example of a much broader effort in the US. (It's not just the US; in Canada, the Fraser Institute is also has programs targetting students, as well as their teachers. No doubt those of you in places like the UK or in Australia can find similar examples easily enough.)
I imagine that most of the young people going to George Mason University (a public university!) and studying economics have no idea in advance of the attempted brainwashing they will be subjected to. Sadly, a copy of The Economics Anti-Textbook is not (yet) in the GMU library...
RH
Posted by AntiTexter at 9:44 PM No comments:

"A new economics for the 21st century"

That's the title of a short essay recently written by Neva Goodwin of Tufts University (who is also one of the authors of Microeconomics in Context an introductory text we explicitly excepted from the criticisms leveled at the 'standard' texts in The Economics Anti-Textbook). She begins the essay with these words:

The critical role for economic theory is no longer simply to explain how the existing system works, but also to explore how the economic system can be changed to become more adaptive and resilient in the face of the challenges of the 21st century, and how it can be more directly designed to support human well-being, in the present and the future.  Simultaneous changes are needed, in both the actual economy (how it functions, by what rules, how it can be made responsive to constraints) and also in economic theory.

The economic theory that was accepted as standard in the non-communist world during the second half of the twentieth century erects serious impediments to meeting the challenges of the twenty-first century.

Her list of 'serious impediments' is an interesting one; some of them we identified in the Anti-Textbook, some we missed, while others, more macroeconomic in nature, were beyond the scope of our book.

She goes on to sketch out "two overarching concepts" that could be thought of as "final goals" for any economy, in contrast with intermediate goals that would be things we'd need to do to help attain the final goals (for example, reductions in inequality, or more consumption for those suffering shortfalls in absolute needs). The first final goal is "well-being and equity in the present"; the second is "productive capital for the future", not only the capital of the standard textbooks (plant, equipment, infrastructure), but natural resources, human health and education, and cohesive social systems.

Mainstream economic theory, as reflected in its textbooks, takes a narrower approach while viewing "the economy as separate from its social and ecological contexts". Goodwin asks:


So what is the alternative? There are, of course, many: ecological, radical, feminist, social, humanistic, old and new Institutionalist, old and new Keynesian, and many other kinds of economics. Each of these emphasizes one part – sometimes a critically important part – of what is missing in the standard approach. But it doesn’t work just to plug in something new: there’s too much wrong with the whole approach. It is necessary, I believe, to start afresh, using as building blocks the best pieces from each of the various alternatives, as well as from standard theory, but fitting them all into a new design

-- a design she calls "Contextual Economics" that recognizes that


an economic system is embedded within a social context that includes ethics, norms and human motivations, and the culture that expresses them. It also includes politics – that is, the deployment of economic and other kinds of power – as well as institutions, and history. Equally important is the recognition that an economic system is embedded within a physical context that includes the built environment, as well as the natural world from which all the materials we use  ultimately derive. The health of any economic system is absolutely dependent on the health of these embracing contexts.

That works for me, but it's a long way from the picture given in the economics textbooks on which I was raised.
RH
Posted by AntiTexter at 6:16 PM No comments: