With unemployment so high in so many countries -- and set to get worse because of misguided policies -- it's worth thinking for a moment about the way that unemployment gets portrayed in the textbooks. I was reminded of this recently when I read a paper by Lars Osberg, a labour economist at Dalhousie University in Halifax, Nova Scotia. In "Why Did Unemployment Disappear From Official Policy Discourse in Canada?", Osberg contrasts the condemnations of unemployment and the vivid descriptions of its social and psychological costs that appeared in widely used textbooks forty years ago with the modern textbook:


Modern labour economics texts (e.g. Benjamin, Gunderson, Lemieux and Riddell, 2007) are shorn of any hint of moral outrage at unemployment, or empathy for the unemployed. ... there is little sense that unemployment is socially destructive.

Much of the typical text is taken up with models of voluntary unemployment: the labour-leisure choices of individuals, and micro model of optimal search behaviour. Osberg writes "Major attention is paid to the debate on how the 'incentives' of unemployment insurance in Canada may have influenced behaviour." The great deal of attention paid to these topics could give the impression that we'd better give priority to watching carefully for people gaming the system and creating large costs by sitting at home collecting pogey (as it's called here in Canada) while pretending to look for work. 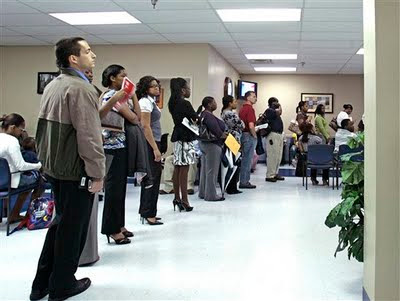 "I heard there might be a vacancy..."
If as much attention were given to the subjective, psychological costs of unemployment, a rather different impression might be given to students. Osberg (pp.149-152) has a good review of the current evidence from studies of subjective well-being. He quotes the German economist Rainer Winkelmann, who has done important work in this area:

You might be thinking that perhaps it's unfair to criticize micro approaches to employment because involuntary mass unemployment is more of a macroeconomic phenomenon and a symptom of the system's dysfunction at that level. Unemployment is indeed seen as costly because less stuff is produced, but (believe it or not) it's also accompanied by the benefit of greater leisure.

For example, here's Daniel Thornton writing on "The Costs and Benefits of Price Stability"  in the Federal Reserve Bank of St. Louis Review (1996, Vol. 78, No. 2). He explains (pp.25-26) that lower inflation in the future brings benefits in the form of higher future output, but at a cost of lower output today (as high interest rates induce a recession). "[T]he costs and benefits [of this policy] could be adequately represented by output gains and losses", which is "common in much theoretical and virtually all applied work," but there are "[t]wo important limitations on this practice". The first is the imperfect measurement of production, such as the omission of home production. The second is that "output does not include the utility individuals obtain from leisure." Incredible, yes, but that's what he wrote. 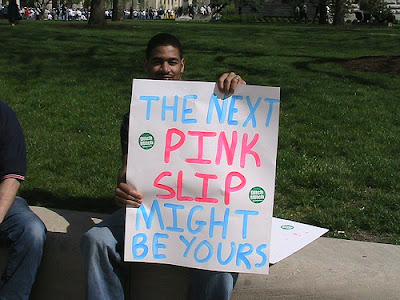 
Ten years before Thornton wrote what I quoted earlier, Willem Buiter and Marcus Miller, in a 1985 paper ("Costs and Benefits of an Anti-Inflationary Policy: Questions and Issues" in Inflation and Unemployment. Theory, Experience and Policy-Making, edited by V.E. Argy and J.W. Nevile) commented with apparent exasperation: "Overwhelming empirical evidence on the importance of work (i.e. of being employed, of having a job) for most people's well-being, happiness and even sanity has not made much of a dent in the ‘extended holiday’ approach to unemployment."
This seems to be another zombie idea that staggers around in economics, causing damage and refusing to die.
RH
Posted by AntiTexter at 4:11 PM