The walkout in Mankiw's Ec 10 class

The students who left Greg Mankiw's microeconomics principles class on November 3rd provoked a lot of attention and comment. The report in The Harvard Crimson quoted an organizers' statement:


Today, we are walking out of your class, Economics 10, in order to express our discontent with the bias inherent in this introductory economics course. We are deeply concerned about the way that this bias affects students, the University, and our greater society.

I can hardly disagree, as this "bias" -- as expressed in all of the mainstream textbooks, not just Mankiw's -- was the central theme of our Economics Anti-Textbook, whose primary goal was to help students in such courses defend themselves against it. 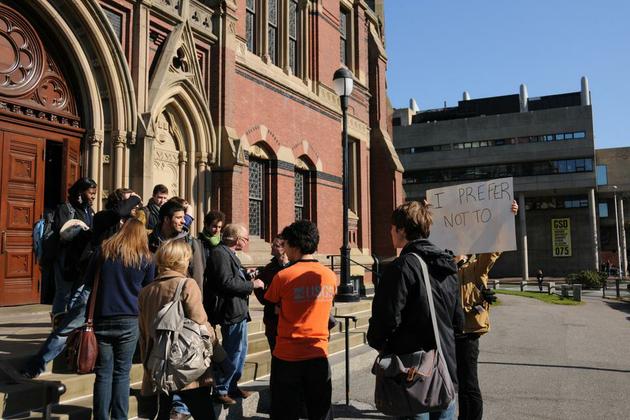 Some students outside Sanders Theatre, Harvard, after leaving Ec 10.  From The Harvard Crimson.
I hope, however, that the students don't think that the problem lies with Mankiw himself. The organizers' statement (which Mankiw posted on his blog) also says:


Care in presenting an unbiased perspective on economics is particularly important for an introductory course of 700 students that nominally provides a sound foundation for further study in economics.

But an "unbiased perspective on economics" is not possible, as we try to argue in the Anti-Textbook. Value judgments pervade everything and 'objectivity' is unattainable. Howard Zinn's comments about the impossibility of objectivity in studying history carry over here, for example. (For example, see his wonderful book The Politics of History, p.10. He writes "That the scholar has decided that he prefers peace to war does not require him to distort his facts... Our values should determine the questions we ask in scholarly inquiry, but not the answers.")

However, a problem arises when students fail to appreciate how pervasive value judgments are. The Harvard Crimson quotes one:


Harvard Republican Club Secretary Aditi Ghai ’14, who took the class last year, said she doesn’t think the class is biased. “The class is about pure economic efficiency. Ideology comes into play when we determine how to balance efficiency with social equity,” she said.

But a decision to focus the course on "economic efficiency" is a value judgement in itself; it puts some questions to the fore; backgrounds others. Our values determine the questions we ask, as Zinn notes, and the questions we don't ask. In the Anti-Textbook (pp.208-210) we also argue that it doesn't make sense to think of "efficiency" as a primary social objective like equity is, although this student has, not surprisingly, been given the impression that it is.

While it's not possible to be "unbiased", and Mankiw is as entitled to his biases and value judgments as anyone else, the textbooks pretend to be unbiased, to be just doing 'economic science', or 'positive economics' while 'normative economics' is supposedly set aside. As noted earlier, that's not possible. (Gunnar Myrdal's little book Objectivity in Social Research is all about this point, but I expect that 99% of all economics students now have no idea who Myrdal was... Apparently all you need to know is in the most recent journal articles.)
I read the students' open letter to Mankiw as also asking for a broader perspective in the principles course. ("As your class does not include primary sources and rarely features articles from academic journals, we have very little access to alternative approaches to economics.") That's a key thing that's lacking in the typical mainstream text, and thus in the typical mainstream economics course. As the small number of alternative principles texts demonstrates, it doesn't have to be this way.
RH
Postscript: The sort of alternative texts I mean are books like Bowles, Edwards and Roosevelt, Understanding capitalism (Oxford University Press), Goodwin, Nelson, Ackerman and Weisskopf, Microeconomics in Context (ME Sharpe) or Sherman, Hunt, Nesiba, O'Hara and Wiens-Tuers, Economics: An Introduction to Traditional and Progressive Views (ME Sharpe).
Posted by AntiTexter at 4:31 PM