Another fine talk at Occupy Harvard, but I suggest that you listen to the previous post with Stephen Marglin's talk. Juliet Schor refers to it.
An interesting point that both of them make is that what becomes 'mainstream economics' is influenced by the broader political climate in the society more generally. It follows that actions to change that political climate feed back to help to change economics, creating openings in which critiques of what's currently mainstream economics can get traction.


At one point she says that there was a great disconnect between what macroeconomists were advocating (more growth to lower unemployment) and what climate scientists were saying -- more growth worsens climate change problems. The major exception among economists was Nicholas Stern, who argued that to undertake much-needed investments to tackle climate change would also help to address the unemployment problem.
RH
Posted by AntiTexter at 1:51 AM 2 comments:

A great talk by Stephen Marglin

Stephen Marglin's talk at Occupy Harvard is well worth a listen. How I wish I could have had a course like his when I was an undergraduate!

The ultimate effect of unrealistic assumptions?

I read Arjo Kalmer's Conversations with Economists shortly after it came out in 1984. One of the most striking interviews was with Leonard Rapping, the orthodox economist turned dissident, who took refuge at the University of Massachusetts in his last years. (He died at only 57 in 1991.)

In the interview (pp.221-222), Rapping says of Milton Friedman's famous Essays in Positive Economics that Friedman "hit on an argument that was incredibly powerful. What seemed like an innocent point in logic and scientific methodology is, through the workings of the mind, transformed into a description of the world for his students." This comes about because


people, myself included, can't stand the idea that we can draw true conclusions from false premises. (Of course, a lot of people argue that you want to start with realistic assumptions.) Friedman's position is too extreme. The students, in the end, can't stand to live with that position, so they solve the problem by seeing the world as competitive, making the assumption 'true'.

RH
Posted by AntiTexter at 9:00 PM No comments:

The true face of Father Christmas 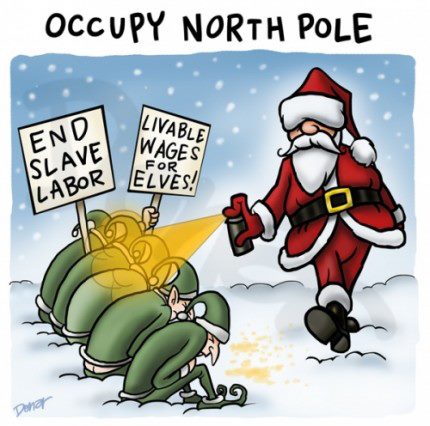 Posted by AntiTexter at 6:44 PM No comments:

Dani Rodrik's recent Project Syndicate column "Occupy the Classroom?" is well worth a look. It's a thoughtful piece on the doublethink that many economists seem to practice that expands on the earlier remarks of his that we quoted in The Economics Anti-Textbook (pp.5, 262).

Rodrik
Rodrik distinguishes between the limitations of what economists really know and thus what they tell graduate students, and the stripped-down version offered to undergraduates because, apparently, all the qualifications are "deemed to be in appropriate (or dangerous) for the general public". (I wrote a bit about this theme in an earlier blog.) Instead, what economists are apt to do is to choose from the plethora of models available ones "that best accord with their own personal ideologies".
He concludes:

the economics we need is of the “seminar room” variety, not the “rule-of-thumb” kind. It is an economics that recognizes its limitations and knows that the right message depends on the context. Downplaying the diversity of intellectual frameworks within their own discipline does not make economists better analysts of the real world. Nor does it make them more popular.

RH
Posted by AntiTexter at 6:42 PM No comments: