Unsustainable fisheries and the power of industry over policy

One of the things we tried to do in The Economics Anti-Textbook was to point out some important problems in the world that are not being adequately addressed by policy and, at the same time, are being strangely ignored or underplayed by economics textbooks. A big issue, in our view, is the on-going depletion and destruction of wild fisheries around the world. 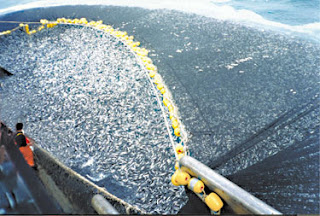 On 31 December, The Guardian Weekly reprinted this piece from The Washington Post's environmental reporter, Juliet Eilperin, under the headline "Fishing in the wild is heading south." It reports that "some of the nations that have traditionally sought out the most seafood, or depend on it as a primary food resource, are resisting steep cuts in fishing quotas", going on to quote some typical bullshit from a spokesman for the Japanese Fisheries Agency.
The textbooks are generally loathe to point out the realities of corporate power and the supine nature of governments in the face of such narrow interests. Probably the one major exception is the story of 'regulatory capture' where government regulators get unduly influenced by the industries that they are supposed to be regulating. Here's an example from a leading Canadian text in a section on 'Regulation of Oligopolies':


The record of postwar government intervention into regulated industries seems poorer in practice than its supporters had predicted. Research by the University of Chicago Nobel Laureate [sic] George Stigler (1911-1991) and others established that in many industries, regulatory bodies were 'captured' by the very firms that they were supposed to be regulating. As a result, the regulatory bodies that were meant to ensure competition often acted to enforce monopoly practices that would have been illegal if instituted by the firms themselves. [from Christopher Ragan and Richard Lipsey, Microeconomics, 13th ed., p.296]

This fits nicely into the story some like to tell of government as serial bungler when it comes to dealing with market failures. Naturally, the 'captured by regulators' line becomes in their hands an argument for deregulation and letting corporations do as they want! An alternative approach is that of Ralph Nader, who has proposed simple and cheap ways of organizing consumers of regulated industries to defend their interests and counterbalance the power of industry.

RH
Posted by AntiTexter at 9:24 PM