The Circular Flow, in context

I'm giving a course this term that includes some introductory macroeconomics this term. It begins with the usual circular flow picture:

This picture of an economy is fine as far as it goes, but it lacks a broader context.
The text I'm using (Mark Lovewell's Understanding Economics, Toronto 2009) does the old trick of describing "environmental sustainability" as one of the central 'economic goals' in Chapter 1, and then, after that one paragraph, never mentions the troublesome concept again. This tactic (what we call "note and forget" in The Economics Anti-Textbook) is a good way for authors to defend themselves against the charge that they ignore a critical issue. ("There it is on page 20! What more do you want?")
I still remember the impact of actually seeing for the first time in a diagram a picture of that circular-flow economy embedded in the broader ecosystem. It was in an article by Herman Daly, one of the pioneers of ecological economics, and it looked something like this: 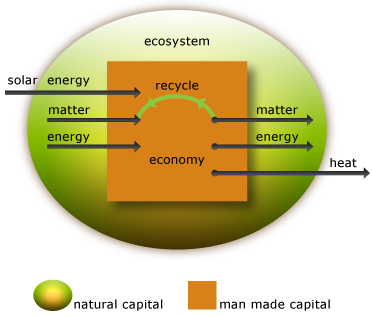 The picture neatly summarizes the limited nature of the matter to which we have access, raises questions about the capacity of the ecosystem to absorb matter (waste) discharged into it from the economy, the extent of recycling, and the what limits there might be to the growth of the economy within the ecosystem. By altering the size of the 'economy' box relative to the size of the ecosystem, it can illustrate the transition we've made from the 'empty world' to the 'full world', where our demands are pressing up against the limits of the ecosystem to supply them. (On the last point, for further references, see The Economics Anti-Textbook, p.253).
If the text I'm using were serious about saying anything meaningful about "environmental sustainability", it would have a diagram like this in it.

RH
Posted by AntiTexter at 4:33 PM