With another year comes another introductory economics course. I'm using Understanding Economics. A Contemporary Perspective (by Mark Lovewell of Ryerson University) for a one-term course in which the students are supposed to learn something of both intro micro and intro macro. It was discouraging to read the following in the very first paragraph:


Economists assume that people customarily engage in rational behaviour, meaning that each one of us makes choices by logically weighing the personal benefits and costs of every available action, then selects the most attractive option based on our individual wants.... [T]he assumption of rationality is ... significant. As long as it is met, human behaviour can be fruitfully analyzed and predicted.

This clearly implies that if behavior is not rational, human behaviour can't be fruitfully analyzed and predicted. But that's just not correct. Irrational behaviour doesn't mean that behaviour is random and unpredictable. Instead, people can make systematic mistakes: mistakes that are therefore predictable.
Dan Ariely, a professor of psychology and behavioural economics at Duke University, has made that case very persuasively in his entertaining and informative book, Predictably Irrational. He's also got a thought-provoking blog here. 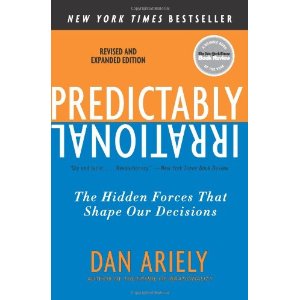 Of course marketing people know all about predictable irrationality too. For example, in his 2010 book, Priceless: The Myth of Fair Value (and How to Take Advantage of It), William Poundstone has a whole chapter on how restaurant menus are put together to influence people's purchase decisions. He reports that a Westin hotel in Manhattan has a truffle and goji berry bagel on the menu for $1,000. Things being what they are in Manhattan, some might actually be sold to hungry hedge fund managers looking for a quick bite, but the main function of a menu item like that is to make the other overpriced things on the menu look cheap by comparison. Tricks like this really work. In contrast, in the theory offered in the standard microeconomics textbook, the presence of such an irrelevant alternative as a $1000 bagel would have no effect on your rational choice among the other items.
As we note in the Anti-Textbook, behavioural economics has yet to make any real impact on the textbooks, but -- today at least -- I'm feeling optimistic that reality can't be overlooked for too much longer.
RH
Posted by AntiTexter at 10:52 PM