While everyone watches to see whether Egyptians will be able to achieve some real democratic opening in the face of the U.S. and 'Western'-backed military regime, this excellent column in The Independent by Johann Hari ("We all helped suppress the Egyptians. So how do we change?", 4 Feb.) points out that we need more democracy at home. It's an easy point to miss if you've been properly indoctrinated by our education system. 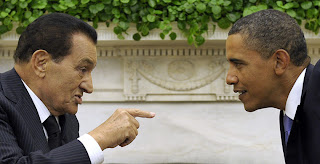 In happier days
The power of business and elite interests in shaping foreign and domestic policy is systematically swept under the rug in the training of economics students. So it should come as a shock to read Mr Hari's quote of a former Labour MP saying (approvingly!) that "public opinion does not influence foreign policy in Britain. Foreign policy is an elite issue." (I think the same thing could be said about the United States and Canada and many other places.) As Mr Hari puts it, foreign policy "is formulated in the interests of big business and their demand for access to resources, and influential sectional interest groups." He concludes


It doesn't have to be like this. We could make our governments as moral as we, the British people, are in our everyday lives. We could stop them trampling on the weak, and fattening thugs. But to achieve it, we have to democratise our own societies and claim control of our foreign policy.

It would not only be control of foreign policy, either. As we write in The Economics Anti-Textbook, "How governments behave depends on the strength of the country's democracy. Where democracy is weak and the power of big business is strong, governments can be expected often to act against the interests of the vast majority of the population."

RH
Posted by AntiTexter at 1:54 PM